“Once Gay” Christians Defend Their Right to Counseling, but Legislators Remain Unmoved

Hundreds of Christians from throughout the state gathered at the California state capitol last week to defend the liberty of “once gay” citizens to receive counseling and resources to help them live lives in accordance with their faith. AB 2943, introduced and sponsored by the LGBT legislative caucus, threatens anyone, even churches, with lawsuits  for “advertising, offering to engage in, or engaging in for sale, or selling services constituting sexual orientation change efforts.” This includes any resources, books, conferences, programs, college classes, or counseling that seek to change same-sex desires, behaviors, or gender expressions. Despite having more than 20 former homosexual and transgender individuals, and over 350 citizens testify against AB 2943 in the Senate Judiciary Committee, legislators approved the bill anyways, with a vote of 5 to 2.

Before the Tuesday, June 12, afternoon hearing, the California Family Council, in partnership with the Equipped to Love, Capitol Resource Institute, and Faith and Public Policy hosted a “Day of Action” rally on the west steps of the state capitol. Starting at 9 a.m. “once gay” men and women with Equipped to Love told testimony after testimony, for over two hours, of how God had led them out of homosexuality and how they were helped by the biblical resources and counseling AB 2943 seeks to ban.  The day prior, these same individuals visited every senator’s office and presented them with a book of their testimonies titled, “Changed.”  Personal invitations to the rally were also given out all 120 legislative offices, along with encouragement to visit oncegay.com, a website offering proof that change is real. 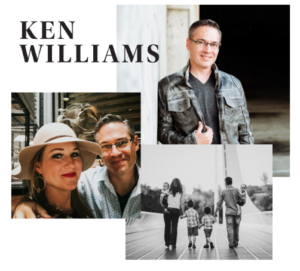 Ken Williams, co-founder of Equipped to Love, spoke at the rally about his dismay that California legislators would say leaving homosexuality and change wasn’t possible.”That’s pretty personal when that is your life story,” said Williams, who helps run a ministry at Bethel Church in Redding, California to help people wanting to leave homosexuality.”We come today to make an appeal to the world and to lawmakers. Let us decide our sexual identity,” he said to enthusiastic applause.  “I should decide who I’m going to be.”

Williams went on to say legislators claim they are trying to be inclusive, but he feels excluded. “I have dealt a lot with mockery and rejection for being effeminate growing up, but I have never been discriminated against,”Williams said. “For the first time in my life, I feel discriminated against…and it was because of AB 2943.”

“The entire gospel is about change. It is about hope,” said Pastor Hibbs.  “The very gospel message is that Jesus Christ changes lives.”This house (state capitol) stands for, they say, choice. And we are just simply asking that people be left alone and let them make their choice. If they want to receive our input from God’s word or not. It’s a free country. Let’s keep it free. And let’s keep our pulpits free with hope.”

“I’m here to declare that today is a defining moment,” President Jackson said. “The Declaration and the Constitution promise freedoms. Today, what we are asking in this house of government is that they respect the inalienable rights that come from our creator. And we believe those rights include freedom of seek change through the power of Jesus Christ.” 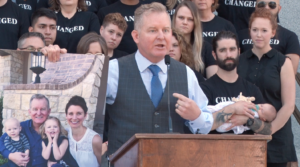 Pastor Domen, a former homosexual, started his remarks holding up a large picture of this wife and two children. He delivered a message directly to California legislators. “My wife, my four-year-old daughter, my one-year-old son, and the baby in my wife’s womb are not fraud. Assembly Bill 2943 removes my right to chose my sexuality.” I left the homosexual lifestyle 16 years ago, “change is possible. This bill would prohibit myself, and my brothers and sisters behind me from from choosing our sexuality. What has California become?”

At the conclusion of the rally, hundreds entered the capitol and lined the hallways for an opportunity to voice their opposition to the bill. AB 2943 author Assemblyman Evan Low and co-author Senator Scott Wiener stood first to speak. “Conversion therapy is psychological torture,” Wiener said. “It assumes that being LGBT… is a illness or a problem to be fixed, as opposed to who someone is.” Low told committee members the intent of the bill was to declare the sale of sexual orientation efforts a “fraudulent business practice.” Low went on to say that he amended the bill to apply only to services and not goods, such the sale of Bibles.

But according to several legal experts, the bill still applies to goods, such as books, even with the amendments. Pacific Justice Institute Attorney Kevin Snider explains that the recent amendments did not take out the word ‘good’ from the bill. “This amended bill tosses a frigid damp blanket on the bright fires of free expression,” Snider wrote in an opposition letter. “In the event of passage, California sits poised as the only state to subject a bookseller to civil liability because of government disagreement over the idea contained in the literature.”

Domen and the other co-founder of Equipped to Love, Elizabeth Woning, testified of their sexual orientation change and their hope that legislators would not take away the rights of LGBT people to question their sexuality, and get resources to help make their own decisions about their sexual identification. Then for the next hour over 350 people, including many of those who experienced sexual orientation change themselves, stood up at the hearing microphone and gave short statements of opposition against the AB 2943. (Watch the hearing below.)

After the testimony concluded Republican Senators John Moorlach and Joel Anderson, who opposed the bill, asked some additional clarifying questions. The Democratic Senators affirmed their believe in religious liberty, but said they believed the bill would not affect religious practice in a way that would justify opposition. 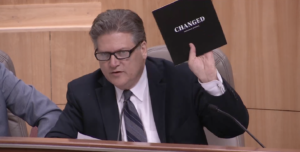 For example, Senator Robert Hertzberg supported the bill even though he acknowledge reading “Changed”, holding the book up for all to see. Since the bill still lets churches preach its beliefs, give out resources, go to counseling, and hold conferences as long no money is exchanged, Herbert said religious rights are not being violated. “When you go to church… there is no cost to that,” Hertzberg said. But the 1st Amendment isn’t just for those who give away their services or goods for free. Churches charge for conferences, counseling, and books to cover their costs, and that has always been their right under freedom of speech and freedom of religion protections.

In the end, five Senator (Hannah-Beth Jackson, Robert Hertzbert, Bob Wieckowski, Bill Monning, and Henry Stern) voted yes and two Senator (John M. W. Moorlach, Joel Anderson) voted no. The bill now goes to the Senate Appropriations Committee Monday, June 25, and then to the Senate floor for a full vote of the Senate. If the Senate approves the bill, the full Assembly will also have to vote on this amended bill again before the Governor makes his decision. All of this could happen before the summer legislative break, which begins on July 5.

For more bill information and action steps on how to oppose this bill go to AB2943.com.