California teachers used to receive training to prepare students for success in life by teaching math, English, history, civic and other topics to help them to become productive citizens.  Unfortunately, there has been a radical shift in recent years, as evidenced by the training teachers in the Los Angeles Unified School District (LAUSD) are forced to endure.

LAUSD is now training teachers to use the preferred names and pronouns of transgender identified students. According to a report from a national grassroots organization, Parents Defending Education, a staff member from Los Angeles Unified School District considered the training a “cult-retreat-like experience” with staff forced to participate in “socioemotional learning” training which included “critical social justice gender ideology.”

According to the staff member, LAUSD hired a restorative justice expert who provided teachers a handout seeped in transgender ideology titled “Identity Working Terms.” This handout was written by the California Conference for Equality and Justice (CCEJ), a human relations organization dedicated to “eliminating bias, bigotry, and racism through education, conflict resolution and advocacy.”

The handout defines “gender identity” as “our innermost feelings of who we are as a woman, man, both, and/or neither.” Basically stating one’s gender identity can be the same or different than one’s biological sex. The handout explains “sex assigned at birth” is “the category that we are all placed in at birth by family members, medical professionals, and government officials and policies.” But our gender expression is “the ways we act”, “our voice”,  “our clothing”, “hairstyles”, “the way we move our bodies”, and “other forms of presentation” that lets others know our gender.

The handout also has a section titled “Affirming Student Name/Gender on Electronic Platforms,” which states, “All students have the right to be referred to by their chosen name/pronouns, regardless of their legal or school records. A legal name change is NOT required for unofficial name changes.”  Although only a parent/guardian or a student who is 18+ is allowed to request changes in the student information databases. Schools must address a student by their preferred name and gender pronouns, whether the parent approves or not.

Actually, LAUSD is teaching teachers they cannot alert parents when their child is using a new name and pronouns at school unless the student agrees to let the school disclose this information.

In 2019, LAUSD released a policy bulletin, “Gender Identity and Students – Ensuring Equity and Nondiscrimination”, which discusses that every effort should be taken for using the names and pronouns that align with a students “gender identity”. “While inadvertent slips or honest mistakes may occur, the intentional and persistent refusal to respect a student’s gender identity is a violation of District policy and may constitute discrimination under State law.”

The “Identity Working Terms” handout goes on to include a section titled “Interrupting Bias: Calling Out vs. Calling In” in which staff are explained to when and why teachers should confront specific problems:

The document then ends with “The Gender Unicorn,” an image of a unicorn that was created to “portray the distinction between gender, sex assigned at birth, and sexuality,” to children according to Trans Student Educational Resources.

The LAUSD staff member who exposed the training material informed Parents Defending Education that, “the trainers called for us to raise our hands if we could commit to using preferred pronouns and STAND UP if we commit to using trans students’ preferred names.” He then explained that if any staff did not stand up, it was an obvious sign that you’re problematic and bigoted and in the wrong. 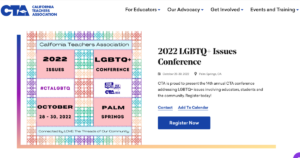