SACRAMENTO – The American Civil Liberties Union (ACLU) and State Senator Scott Wiener (D- San Francisco) have teamed up on a bill, SB 357, making its way through the legislature to decriminalize streetwalkers hanging out on street corners. Wiener, who wants to decriminalize prostitution, believes California police officers shouldn’t assume scantily clad women hanging out on street corners and talking to men driving by in cars are involved in prostitution.

“Arrests… are based on an officer’s subjective perception of whether a person is ‘acting like’ they intend to engage in sex work,” Wiener explained in a press release. “Our laws should protect the LGBTQ community and communities of color, and not criminalize sex workers, trans people, and Brown and Black people for quite literally walking around or dressing in a certain way.”

SB 357 specifically repeals California’s law against “loitering with the intent to commit prostitution.”

Los Angeles Sheriff Alex Villanueva disputes Wiener’s characterization and says the “underlying root” of the “loitering with the intent to commit prostitution” law is to “target sex buyers who seek to exploit.”  In his SB 357 letter of opposition, Villanueva explained the current loitering law, approved by the California legislature in 1995, helps police “keep prostitutes from hanging around public places, business, and residential communities, which can breed crime and drug use.”

Villanueva also said Wiener’s attempt to protect a “vulnerable community” from prosecution will have the “unintended consequence” of “benefit[ing] the sex buyers.”

Like Wiener, one of the bill’s sponsors, the ACLU of California, argues that loitering laws “create opportunities” for police to discriminate against racial and sexual minorities. As evidence, the ACLU wrote that Black adults accounted for 56 percent of those charged with loitering for prostitution in Los Angeles between 2017 and 2019, “despite only making up 8.9 percent of the city’s population.” While not discussing other causes or remedies for getting rid of this disparity, Wiener and the ACLU conclude getting rid of the loitering law is the only solution. But this conclusion is better understood when considering that Wiener and the ACLU have advocated for the complete legalization of prostitution in other contexts.

One of the surprising supporters of SB 357 is the Coalition to Abolish Slavery and Trafficking, also known as CAST, an organization well known in California for helping women escape lives of prostitution by providing a variety of services including counseling, housing, mentoring, and legal resources. The organization’s SB 357 letter of support parroted the language used in the ACLU opposition letter, pointing towards the discriminatory way that police use the law to target minorities. CAST also said the loitering law doesn’t help trafficked women.

But not all anti-trafficking organizations agree with legalizing streetwalking as a way to help those trapped in prostitution. Doug Bennett founded a Christian ministry in Bakersfield, California, called Magdalene Hope Inc. in 2009 in an effort to reach out to women working in the commercial sex industry.

“We, as an organization, who have been fighting to end sex trafficking for over 12 years in Central and Southern California, feel that repealing or amending this law will give traffickers more opportunities to place victims of sex trafficking on the street for sale,” Bennett said, regarding their opposition to SB 357.

“Although not all sex workers are trafficked, our research shows that seven out of ten prostitutes are victims of sex trafficking. With more law enforcement officers being trained in identifying victims, this change to the law will eliminate the ability to ascertain whether or not an individual is on the street by choice or if someone is profiting off of them.”

(read more about “The Link Between Prostitution and Sex Trafficking”)

Senator Wiener’s district of San Francisco has a long history of prostitution and trafficking, with civic groups fighting against it over 100 years ago. Recently though, policymakers have moved towards legalizing the sex trade. San Francisco’s current district attorney, Chesa Boudin, promised when elected in 2019 to not prosecute cases involving quality-of-life crimes. Crimes such as public camping, offering or soliciting sex, public urination, blocking a sidewalk, etc., should not and will not be prosecuted,” according to Newsweek.

Now Wiener seems to want the rest of the state to follow San Francisco’s example. SB 357 has already passed the Senate and is now in the Assembly Public Safety Committee, with a hearing scheduled for July 13th. 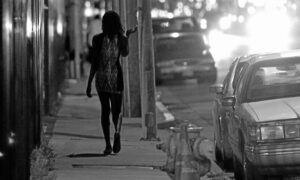