Newsom Says “No” to Large Church Meetings, a Few to Open Anyways

For weeks churches, Republican legislators, President Trump, the US Department of Justice, and religious liberty law firms, confronted Governor Newsom over his bans on in-person church services calling them discriminatory and unconstitutional. Last Monday, a week after Trump demanded governors let churches meet, and a week before 1200 California churches reopen on May 31, Newsom relented… sort of.

In his 13-page COVID-19 guidance document for churches, Newsom says it’s okay to have in-person meetings if gatherings are limited to 25 percent of building capacity with a maximum attendance of 100 people. That works fine for smaller churches, but these restrictions are completely unworkable for large churches with 1000-seat or larger auditoriums. Using the authority of the Bible and the Constitution, some large churches have decided to publicly defy Newsom’s rules.

“While we appreciate the efforts made to allow places of worship to resume services, the guidance limiting occupancy to 25% or 100 people, whichever is less, is not acceptable because it still discriminates against places of worship,” said Attorney Robert Tyler, President of Advocates for Faith & Freedom, who helping to organize 1200 California churches planning to open on May 31.

“Restaurants, for example, have no stated occupancy limitation but simply require that guests at tables be separated by six feet. Additionally, large stores continue operating without being limited in their occupancy from their normal levels. While many churches will have no problem complying with the 100 person limit, some of our clients have churches that seat 2,500 people and more. Limiting places of worship to 100 people is arbitrary, unreasonable, and unconstitutional. Our clients will continue to make plans to hold services on May 31, 2020, and many will not limit themselves to 100 persons.”

One of those clients is Pastor Jim Franklin of Fresno’s Cornerstone Church. He believes the restriction on the size of the meeting are discriminatory and violate his church’s religious freedom. “We will be safe,” Franklin said at a press conference this week. “We just want to be treated fairly. If a big-box store can do this, so can we. … By keeping the church doors closed, we are denying them a vital part of their religious freedom.”

Cornerstone church’s auditorium seats 1,400, and Franklin plans to follow Newsom’s 25% capacity rule and permit only 350 people per service. The church plans to practice social distancing, give face masks to those who don’t have one, and discourage high-risk members of the congregation from attending.

“By keeping the church doors closed, we are denying them a vital part of their religious freedom,” Pastor Franklin said.

Another leading pastor with a large congregation planning to open this Sunday is Dr. Sammy Rodriguez, President of the National Hispanic Christian Leadership Conference (NHCLC), the world’s largest Hispanic Christian organization with 42,000 plus U.S. churches. He leads a church named New Season with one of its large campuses in Sacramento. This afternoon on a pastors’ conference call with Congressman Tom McClintock and hosted by Williams Jessup University President Dr. John Jackson, Rodriguez announced his plans to open his church this Sunday. He plans to strictly adhere to the CDC COVID-19 safety guidelines and the 25 percent of capacity rule, but he is refusing to adhere to Newsom’s 100-person cap on attendance.

“If there is not a lid on the number of individuals at Target, Sam’s Club, Costco, a liquor store, a factory, why is the governor discriminating in placing a cap on the maximum number who can attend a church service?” Rodriguez said. “Who gives him that right?”

He went on to explain his worldview regarding the “pecking order” of authority when it comes to government and citizens. “God over man and man over government. … And when government grows, government pushes man and God out of the way.

“Let’s not permit our God-given rights to be sacrificed or to be diminished in this time of crisis,” Rodriguez told pastors. “We are opening our churches not to protest Governor Newsom, God forbid. … But I hate the idea of discrimination and as pastors, we are what we tolerate. There is no such thing as comfortable Christianity and today’s complacency is tomorrow’s captivity.” 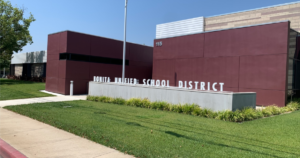