Over the weekend while speaking at the Values Voter Summit in Washington, D.C., Vice President Mike Pence spoke about the importance of pro life work to the current administration.

Pence reminded the audience of Trump’s pro life milestones so far. The reinstatement and expansion of the Mexico City policy to ensure that taxpayers don’t go to fund abortions around the world. Pence also stated his pride in casting the tie-breaking vote in the Senate to enabling the states to defund Planned Parenthood.

“With your strong support, we’ve stood strong for life.  But our administration has also taken action to protect and promote our first freedom, the freedom of religion and religious liberty for every American,” said Pence.  “Last year President Trump chose the National Day of Prayer to announce new policies to protect the religious liberty of every American regardless of their creed.”

“We’ve taken action to protect the conscience rights of doctors and nurses,” said Pence. “And after years of neglect, we’ve restored federal enforcement of our nation’s conscience laws and we ended the last administration’s assault on the Little Sisters of the Poor.”

Pence also took a moment to talk about the lack of patriotism coming from the left. “Hollywood find[s] it fashionable to mock the values of the American people.  In fact, Hollywood elites routinely mock faith and family and patriotism, and many leading Democrats have joined the chorus.”

“We all remember Hillary’s ‘basket of deplorables’ a few years ago.  Well, now the governor of New York recently said that America was, quote, ‘never that great.’  And my predecessor, Joe Biden, said just last week that those of us who stand for traditional moral values are forces of intolerance, including the dregs of society.”

“The truth is faith, family, hard work, and patriotism are the glue that has bound the fabric of our nation for generations,” said Pence.  “We’re not a people bound together by geography or ethnicity.  We’re a people bound together by a common commitment to freedom and a belief that we the people are endowed by our Creator with certain inalienable rights of life and liberty and the pursuit of happiness.

“Finally, let’s keep faith that He who has ever watched over this nation still governs in the affairs of men,” declared Pence as he concluded his remarks. “And that as we hold fast to Him we will run and not grow weary, we will walk and not grow faint, and that He will yet bless America abundantly more than we could ask or imagine in his one nation under God, indivisible, with liberty and justice for all.”

Vice President Pence received a thunderous standing ovation when he emphatically said, ““I couldn’t be more proud to serve as vice president to a president who stands without apology for the sanctity of human life.” 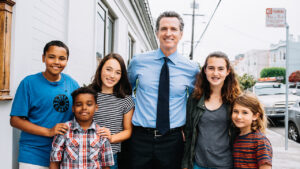