The numerous protests around the country that have been heating up for more than a year now over various school district’s choices to bring graphic Planned Parenthood sex ed into public schools have prompted the Republican National Committee to unanimously pass a resolution urging state lawmakers to do more to ensure that parents have a say in their children’s curriculum.

Just a few weeks ago, Planned Parenthood launched a desperate campaign in New York encouraging kids to f*** everyone. This is the very same organization writing the exact same sex education curriculum that many schools have recently adopted. No wonder parents and families are outraged.

“I’m thrilled this resolution passed,” Virginia’s National Committeewoman Cynthia Dunbar said after the vote, according to Family Research Council. “This should not be a partisan issue. Parents everywhere deserve the right to know what their children are being taught and afforded an opportunity to consent to it.” More from the FRC Update:

FRC’s Cathy Ruse points out, that liberal school boards have tried to use “opt out” provisions to shield themselves from criticism. (“Hey, we don’t force it on anyone, you can always opt-out!”) But in reality, most parents have no idea that they can pull their kids out of class — or worse, that they’d even need to. A lot of parents trust their local schools — and the districts have taken advantage of that trust by misleading them about the true content of sex ed. In Fairfax County, for example, some of the lessons labeled “abstinence” weren’t about abstinence at all! 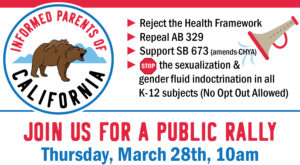