The Military Religious Freedom Foundation (MRFF) has time and again attacked Christianity in the United States Armed Forces. They file lawsuits nearly every year attacking the right of religious expression. In 2016, they filed a lawsuit attacking a plan by the Marine Corps to implement “spiritual fitness training,” even the the training did not seek to promote any particular religion.

The latest in their string of attacks has been an F.E. Warren Air Force Base memorial in Wyoming dedicated to remembering members of the Armed Forces who are missing or captured.

The memorial is also known as the “Missing Man Table,” and is a special table reserved for the memory and families of those who are prisoners of war or missing in action. The table is set for six, representing the Army, Marine Corps, Navy, Air Force, and Coast Guard – and civilians. The table is round, expressive or everlasting concern, with a white tablecloth representing purity. The National League of POW/MIA Families describes more about this memorial:

The single red rose reminds us of the lives of these Americans….and their loved ones and friends who keep the faith, while seeking answers.

The yellow ribbon symbolizes our continued uncertainty, hope for their return and determination to account for them.

A slice of lemon reminds us of their bitter fate, captured and missing in a foreign land.

A pinch of salt symbolizes the tears of our missing and their families – who long for answers after decades of uncertainty.

The lighted candle reflects our hope for their return – alive or dead.

The Bible represents the strength gained through faith to sustain us and those lost from our country, founded as one nation under God.

The glass is inverted – to symbolize their inability to share a toast.

The chairs are empty – they are missing…

The Military Religious Freedom Foundation claims that it received complaints from service members about the memorial. The founder and President of MRFF, Mikey Weinstein, forwarded the “alleged” complaints to the commander at the Air Force Base. That led to the Bible’s removal from the table and its replacement with a “book of faith” representing five different religions, and several blank pages for those of no particular religion.

The base was not just named for heroes; warriors who became heroes once called it home. One of them, World War I fighter ace and Medal of Honor recipient Captain Eddie Rickenbacker, crash-landed his plane on its dirt strip and survived. Other hereos include Gen. Mark W. Clark, who saw action in WWI, WWII, and the Korean War and was the youngest Army four-star general in WWII; Maj. Walter Reed, M.D., the U.S. Army physician who first postulated and confirmed the connection between mosquitoes and yellow fever (Walter Reed Army Medical Center is named after him); Maj. Gen. William L. “Billy” Mitchell, the military aviation visionary and father of the U.S. Air Force; and Gen. Carl A. Spaatz, who successfully commanded the Strategic Air Forces over Europe in 1944 and became chief of staff of the newly formed U.S. Air Force in 1947.

Pendley concludes by urging President Donald Trump, Secretary Mattis, and Secretary Wilson to work to keep the Bible in its original rightful place at the memorial. 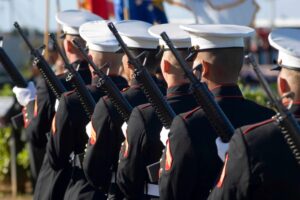