Today, a Riverside County, California judge has overturned a law allowing physician-assisted suicide. Superior Court Judge Daniel A. Ottolia said in his ruling that the California Legislature violated existing law with the passage of the End of Life Option Act.

The End of Life Option Act authorized physicians to prescribe life-ending drugs for patients who were diagnosed as having less than six months left to live. The Act stipulates that a patient must be diagnosed similarly by two physicians in order to receive the life-ending drugs. There are currently only five states in the entire country where this practice is considered legal.

The lawsuit challenging the physician assisted suicide legislation on civil rights violation grounds was originally filed after the  legislation became law. The Life Legal Defense Foundation, American Academy of Medical Ethics, and several other physicians were among those who challenged the law, calling it unconstitutional.

According to Lifenews, Judge Ottolia “ruled that the state legislature should not have approved the assisted-suicide law during that special session because the subject of the law fell outside the grounds of the special session.” Judge Ottolia also stated that the End of Life Option Act does not fall under the category of healthcare options.

Judge Ottolia’s motion gives California Attorney General Xavier Becerra five days to file an appeal to keep the law in place. In a statement provided to the LA Times, Becerra said that “”We strongly disagree with this ruling and the state is seeking expedited review in the Court of Appeal.”

The LA Times states that, “in the first six months [the End of Life Option Act]… was in effect, more than 100 people made use of it to end their lives.” The majority of those people had cancer, according to data from a state survey.

Before the legislation was passed it became very controversial, with critics correctly pointing out that it was too ambiguous and lacked accountability.

Some think that even if the motion is upheld it is still likely to be struck down again by a higher court. No matter the outcome of the recent motion by Judge Ottolia, the End of Life Option Act is currently set to expire in 2026. 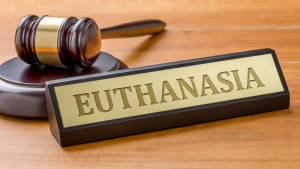