When it comes to protecting children from harmful messages, San Diego Unified School District’s (SDUSD) school board president, Kevin Beiser, underestimated the parents and faith communities in his district. Earlier this month, a rally was organized at a SDUSD school board meeting to protest the district’s overly explicit and discriminatory sex education program. Beiser took it upon himself to visit the KUSI local TV station to tell staff the rally wasn’t worth covering because “just a handful of people would be protesting,” according to reporter KUSI Ashlie Rodriguez.

KUSI ignored Beiser’s request, and it’s a good thing, because 100 frustrated people showed up to express their dismay at the controversial Sexual Health Education Program (SHEP) the district recently adopted. 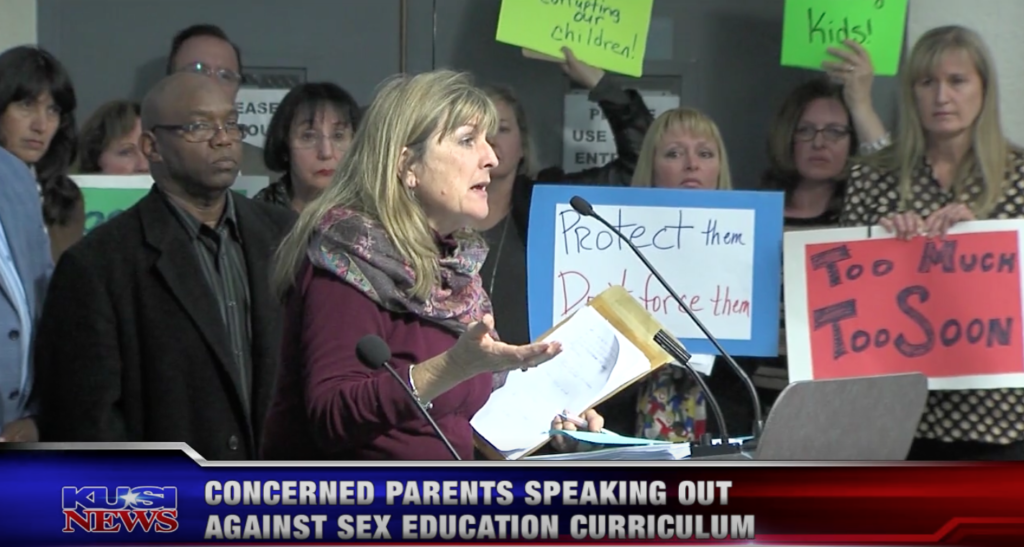 Ashley Bever, a mother of two middle school students, has been fighting against the Rights, Respect, Responsibility curriculum authored by Advocates for Youth, but her objections have largely been ignored by the district over this past year. Her words to school board members summed up what many parents and community leaders were thinking and feeling about a sexual health curriculum they want replaced with one that represents the community’s shared values.

“Yes, they can access sexually explicit content on the TV, the internet, their phones and friends, but if the people in 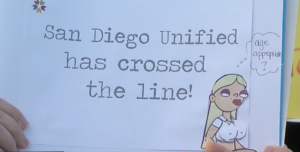 authority positions in their life—the teachers—are providing graphic and detailed information on oral sex, anal sex, vaginal sex, mutual masturbation—with easy internet links to cartoon pornography like it’s no big deal, this confuses a child’s moral compass,” Grantham told the school board. “It will encourage kids to experiment even more, to explore pornography and to try the sexual behaviors deemed as medium risk and even high risk. A pill or a condom cannot protect against the emotional hazards of premature sexual activity. Commonsense should tell us that this is not good for our children and will result in damaging and unhealthy attitudes about sex. Board members, do you want to be responsible for this?”

A lesson on “Birth Control Basics” for 8th grade students promotes the “withdrawal” method as one of seven pregnancy preventing options for junior high students. “It is not as effective as some other methods, it is definitely better than not using anything,” the lesson states.

SHEP uses the book, “Sex Is a Funny Word,” to accompany its 6th grade sex education. Here are a few comments from parent reviews on Amazon to get a feel for the book’s content.

Then there is the issue of the disrespectful and discriminatory tone SHEP takes toward those with religious values. Speaking on this topic at the rally before the school board meeting was San Diego Pastor Milton Chambers from New Hope Friendship Missionary Baptist Church. He believes SHEP is “profoundly offensive.” He urged the school district to be inclusive of faith communities. (Watch his speech below.)

“Our faith community deserves to be respected and not marginalized, not relegated, not set aside as unimportant,” Milton told the crowd. “The district is teaching our children that they can’t trust in their religious community. When our children go out and they make their mistakes and they fall, they won’t run to the school district…. They come to their pastor, they come to their faith leaders, and we’re always there to pick them up.”

Milton urged the district to partner with and to show respect to faith communities and parents. “We pose no terror. We are no threat to anything that is good, but we are opposed to anything that does not honor our faith. We ought to be supportive, not discriminatory,” said Milton.

The curriculum’s Lesson 9, “STD Smarts,” confirms Milton’s point. Students are given a homework assignment and asked to visit two website links.  Revealing the curriculum’s total bias against Christian values, the assignment reads: “One site provides accurate information that respects teens, and the other tries to scare and shame teens out of doing anything sexual with another person until they’re married.” One of the links features one of the country’s most well known Christian abstinence teachers, Pam Stenzel, giving a lecture about the dangers of STDs. The other links to Sex, etc. where students can read interviews of straight and gay students praising the use of condoms to prevent STDs when having “penile-vaginal sex” or “penile-anal sex.”

Whether or not you agree with the abstinence speaker’s message or delivery style, the homework’s instructions and questions are clearly manipulative, and designed to lead students to conclude that the abstinence-only educator was backwards, untruthful, and did not respect children.

Esther Valdez, an immigration attorney in San Diego and school board trustee in Coronado, spoke at the pre-meeting rally on behalf of the Latin African American Chaplain Association and the Christian Unity Chaplains. She believes that SDUSD’s SHEP disregards the religious beliefs and culture of Latinos, who make up 47 percent of the district’s student population.

“As Latinos, we are people of faith. … We are people who believe in God and we believe it is our God-given right and our authority, which we have not abdicated, to grant our faith and instill our values with regard to sexual education for our children,” declared Valdez. “What San Diego Unified School District has implemented here has unleashed a torrent throughout the community. Not just throughout the Christian evangelical community, the Latino community, but also the African immigrant population.  Muslim immigrants are also in objection to that.”

Valdez also said the curriculum places teachers “in an untenable situation where they have to go against their freedom of conscience, their freedom of religion, to have to educate children in ways that only a parent should.”

As an example, the teacher’s guide for Rights, Respect, Responsibility reveals on page 24 that this curriculum is heavy on gender identity ideology, an ideology that would be problematic for teachers who adhere to proven science when teaching about children’s binary biology. It says:

The lessons in this curriculum are specifically written to challenge the gender binary and to be inclusive, respectful, and supportive of all gender expressions.

The guide also directs teachers to use outside resources from Gender Spectrum, an organization that is rapidly gaining acceptance in school districts across the nation.

Civil rights attorney, Dean Broyles from the National Center for Law and Policy, who represents the concerned parents, spoke at the rally as well and stressed that the law (California Healthy Youth Act) leaves it up to districts to decide what constitutes age-appropriate sex education material. Parents are also supposed to be included in the process.

“The San Diego SHEP program undermines these faith communities by suggesting that religious viewpoints about sex are unreliable and biased; that only secular resources about sex are accurate and reliable,” said Broyles. “Tolerance is a two-way street. The district should be partnering with religious communities and parents—not marginalizing them and attacking them.”

After the rally, school board trustees faced a packed auditorium as the crowd relocated to directly address the board in a 30-minute public comment period and to deliver 4700 signatures petitioning for the program’s suspension.

Surely, Board of Trustees’ President Beiser now understands why parents object to this horrible program and why it was “worth a mention” in the six o’clock news. It is now incumbent upon President Beiser, the school board and Superintendent Cindy Marten to scrap the Rights, Respect, Responsibility curriculum, and, in the spirit of inclusivity, invite people of faith and cultures different from their own to participate in selecting an acceptable curriculum that respects all beliefs and is scientifically accurate.