Tell Sacramento to Keep LBGT Curriculum Out of Elementary School

The California Department of Education is getting ready to make its recommendations for new K-12  history and social studies curriculum with the goal of creating a school atmosphere where LGBT romantic relationships and identities are normalized and celebrated.

The change is being forced on schools in response to the FAIR Education Act (SB 48), passed in 2011, that requires public schools to teach about LBGT historical figures right along with other recognized American leaders. Over the past six years, LGBT advocacy groups worked with the California Department of Education to create a curriculum framework, which is supposed to be used by school districts as a guideline to implement SB 48. Yet, this framework distorts the law and is being misused.

According to the National Center for Law & Policy (NCLP), a California-based legal group that defends religious liberty, the curriculum framework expands LGBT themes and gender ideology far beyond the intent of SB 48. LGBT activists are falsely telling school districts and book publishers they have no choice but to adopt this expanded curriculum. NCLP President Dean Broyles explains:

“After reviewing the Framework in light of applicable California law, alarm bells started going off. We researched the issues and we have arrived at the informed legal opinion that the new Framework is not mandatory and that parents and school boards should be made aware of its decidedly anti-family and anti-religious nature. Furthermore, local school districts must understand that they are perfectly free to reject the Framework’s discriminatory approach to complying with SB 48. Rather, school districts can comply with SB 48 without engaging in religiously intolerant secular indoctrination and without throwing religious families and religious communities under the bus.”

Broyles points to the California Department of Education’s own FAQ section on SB 48 that states SB 48 gives great latitude to “local districts to determine how the instructional content is included.” And that includes “how the content is covered and at at what grade level(s).”

Last month, the Instructional Quality Commission, which makes curriculum recommendations to the California Board of Education, met in Sacramento to take public comments on the curriculum book publishers have come up with to comply with the FAIR Education Act.  A group of LGBT activist organizations, calling itself the FAIR Education Act Implementation Coalition, loudly complained.

“We have reviewed all of the programs submitted to the IQC for use in K-8 History-Social Science instruction and we’re appalled to find that several failed to substantively include LGBT people or events in history as required by the History-Social Science (HSS) Framework,” the group stated in its letter of opposition. 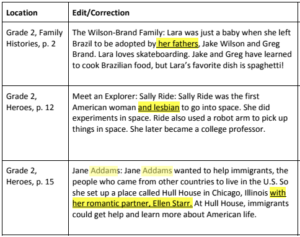 The LGBT coalition’s 35 page letter details page after page of changes the book publishers are “required” to make so the curriculum adheres to the framework.  For example, one publisher was told to change its second grade curriculum to make sure students learn about families with two dads, about same-sex romantic partners, and about the lesbianism of historical figures. (See the graph to the right taken from the opposition letter. Suggested language additions are underlined and highlighted in yellow.)

The California Family Council was one of the few faith-based organization that sent a letter of opposition to the Instructional Quality Commission, arguing that new curriculum should not follow the Social Science (HHS) Framework, because it “promotes a version of sexual orientation and gender identity that doesn’t take into account the sincerely held moral and religious beliefs of millions of California parents.” 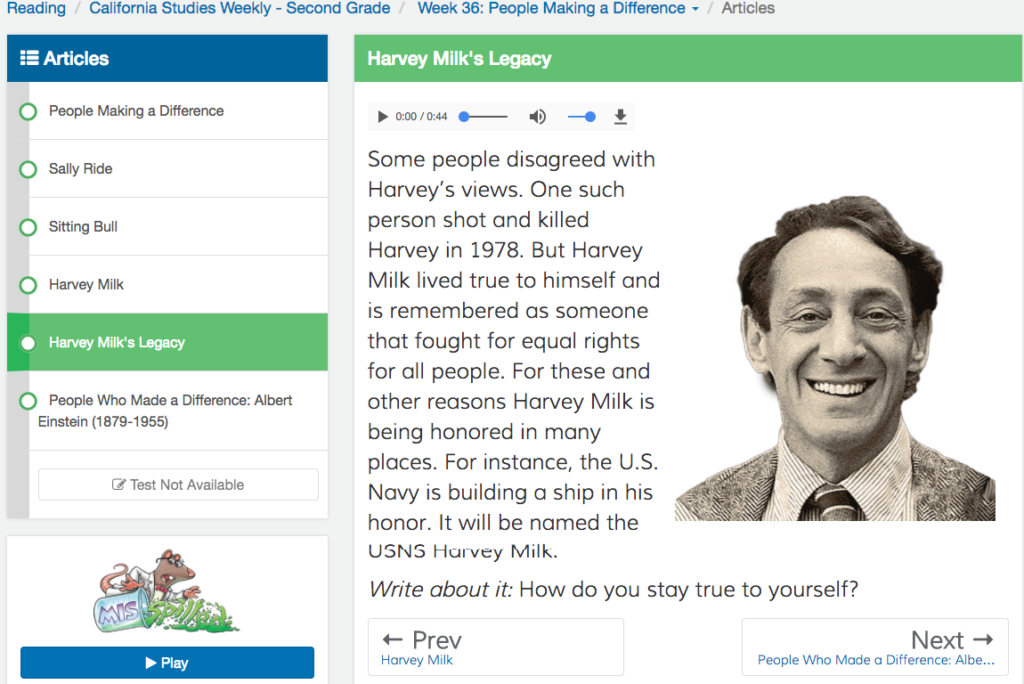 The proposed curriculum also introduces controversial LBGT heroes to students as early as second grade. For instance Harvey Milk, the first openly gay politician in the United States, is praised for being “true to himself,” and fighting for the “equal rights of all people.” Yet, Milk’s official biography dedicates a whole chapter to his sexual relationship with a 16-year-old boy, when he was 33 and living in New York. This doesn’t seem like a hero schools should be encouraging young children to admire.

The public will again be given an opportunity to comment on the proposed SB 48 curriculum before the State Board of Education  on November 16th and 17th. Concerned parents and religious leaders from throughout the state need to let the board know what they think about introducing young children to sexual orientation and gender identity issues. In addition to this,  parents must contact their own school districts to see how administrators plan to implement the FAIR Education Act into their K-8 Curriculum.