In a move vigorously applauded by social conservatives and simultaneously denounced by same-sex “marriage” advocates, President Donald Trump has appointed Roger Severino to head the Department of Health and Human Services’ (HHS) Office of Civil Rights.

Severino formerly served as the Director of the DeVos Center for Religion and Civil Society. As Director, his three main focuses where on religious liberty, marriage, and life issues.

His track record of defending religious liberty, natural marriage, and the sanctity of life go further back then his time at the Heritage Foundation. According to his official Heritage bio, “Severino previously was chief operations officer and legal counsel for the Becket Fund for Religious Liberty, where he argued for the rights of religious believers and houses of worship to be free from discrimination and unjustified government burdens.”

The Becket Fund for Religious Liberty operates fundamentally upon the principle that religious liberty is a universal human right.

But Severino also has prior government experience. His Heritage bio further states, “Before joining Heritage in 2015, Severino was a trial attorney in the Department of Justice’s Civil Rights Division. He worked in the Housing and Civil Enforcement Section on dozens of district and appellate court matters, including issues involving the Fair Housing Act and the Religious Land Use and Institutionalized Persons Act.”

Of special note to conservatives, Severino authored Or for Poorer? How Same-Sex Marriage Threatens Religious Liberty which was published in the Harvard Journal of Law & Public Policy. The conclusion of that publication summarizes how the legalization of same-sex “marriages” was at that time generating “a multiplicity of serious risks for religious institutions.” It also noted that “religious institutions that refuse to treat legally married  same‐sex couples as identical to traditionally married men and women risk losing equal access to a variety of government benefits and privileges,” specifically mentioning tax exempt status, government funded social service contracts, exclusion from government facilities, and exclusion from the state function of licensing marriages.

“Religious institutions face a variety of grave risks in the wake of legalized same‐sex marriage. Some exposure to liability is almost certain to arise, yet some may never materialize. Similarly, courts will receive the constitutional defenses to these risks with varying levels of respect.  Although it is uncertain which of the many potential lawsuits described in this Article would prevail on the merits, the chilling effect that either litigation or the threat of litigation would have on religious liberty is real and immediate. Religious institutions may feel forced to compromise their principles on same‐sex marriage simply to avoid a costly and divisive fight in court, even if such a fight would ultimately prove successful. They will also be pressured to compromise their beliefs or face losing equal access to a wide array of government benefit programs and licensing regimes.”

While at Harvard, where Severino pursued his JD, he was President of the Society for Life, Law, and Religion.

“Some obvious questions arise from the new policy. Will biological males who identify as female be subject to physical fitness requirements for men or women? Will they be required to do 35 pushups or 13 pushups to pass basic training?” Severino wrote in the conservative Daily Signal. “Will American taxpayers be required to pay for expensive “sex reassignment” surgeries, including breast implants in men and shaving down Adam’s apples when that money can be spent on better weapons or more training?”

“Will service members who have addressed an officer as “sir” for years be booted out of the military if they refuse to address him as “ma’am?” he continued. “Wouldn’t the loss and impact on recruiting offset any supposed gains of allowing a relatively few transgender troops the ability to dress according to their chosen identity? These are but a few questions Carter neglected to address in his announcement.”

With the appointment of Severino as the new head of the Department of Health and Human Services’ (HHS) Office of Civil Rights, social conservatives can be confident that Roger Severino will wok to ensure that human rights are not violated while simultaneously ensuring that religious liberty is protected 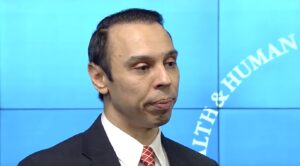