On Wednesday, the United States Senate voted 52-47 to confirm Senator Jeff Sessions as the next Attorney General of the United States. He is the eighth confirmed cabinet member in President Donald Trump’s administration. Trump celebrated the confirmation on Twitter:

Penny Nance, CEO and President, of Concerned Women for America – the nation’s largest public policy women’s organization – congratulated the newly confirmed Attorney General, stating in the press release, “the President picked the best person for the job, and I am pleased to see the Senate confirm him.”

Americans deserve an Attorney General who will enforce the rule of law regardless of their political or personal opinions, and that is exactly what newly confirmed Attorney General Sessions has promised. We look forward to the Department of Justice renewing its focus on the fair and impartial application of justice under Attorney General Jeff Sessions.

Sessions became a Senator in 1997 and has stood for human rights and religious liberty throughout his twenty years in Congress, demonstrating that as Attorney General he will uphold justice and the rule of law. Even Senator Cory Booker who threw racist allegations at Sessions during the confirmation hearings once praised Sessions for his civil rights work.

During his confirmation hearings, Sessions, when speaking of his confirmation hearing for a federal judgeship in 1986, said: “There was an organized effort to caricature me as something that wasn’t true. It was very painful. I didn’t know how to respond and didn’t respond very well. I hope my tenure in this body has shown you that the caricature that was created of me was not accurate. It wasn’t accurate then and it’s not accurate now.”

In the past, Sessions has been quoted as saying, “I will not vote for – and no senator should vote for – anyone who will not render justice impartially.”

A 2014 Washington Times piece described Sessions as “a tea partyer before the tea party was cool because of his unflinching and vocal conservative views on most fiscal and social issues.”

In 2008, Sessions voted in favor of prohibiting minors crossing state lines in order to get an abortion, and voted against HHS grants being used to fund organizations that provided abortions. He voted to impose criminal penalties for harming an unborn fetus, and in favor of banning abortions on military bases.

Sessions has in fact been a strong defender of natural marriage, most notably in his strong support of the Defense of Marriage Act – a prior law until ruled unconstitutional with a self explanatory title – which defined marriage for federal purposes as the union of one man and one woman, and allowed states to refuse to recognize same-sex unions granted under the laws of other states.

Sessions participated in a swearing-in ceremony with Trump in the Oval Office at 10:30 a.m. yesterday, according to the Washington Examiner. 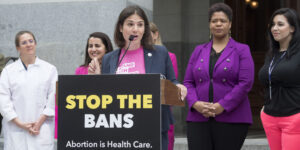