National Geographic is featuring a transgender 9 year old on the front cover of its January 2017 subscriber edition issue.

The photo is of 9 year old Avery Jackson, who claims to be a transgender girl. “The best thing about being a girl is, now I don’t have to pretend to be a boy,” the caption reads. 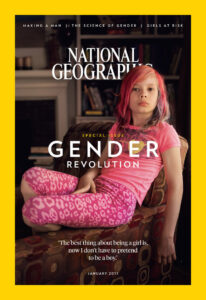 The “Gender Revolution” issue, which hits newsstands nationwide on Dec. 27, examines the “cultural, social, biological and personal” aspects of gender identity, according to a press release. Features include “Dangerous Lives of Girls,” which follows the lives of young women in Sierra Leone, and “Rethinking Gender,” which examines how science can help “navigate the shifting landscape of gender identity.”

National Geographic’s Editor-in-Chief Susan Goldberg told NBC Out that the magazine’s staff was inspired by gender’s omnipresence in the national conversation in creating the issue.

The truth about sexual differences remain undisputed however. The Family Research Council, in a paper entitled Understanding and Responding to the Transgender Movement states:

No one can change his or her sex. The DNA in every cell in the body is marked clearly male or female. Hormones circulating in an unborn child’s brain and body shape his or her development. Psychiatrists and surgeons who have served transsexual clients know surgery does not change sex. George Burou, a Moroccan physician, admitted: “I don’t change men into women. I transform male genitals into genitals that have a female aspect. All the rest is in the patient’s mind.”

A person’s sex (male or female) is an immutable biological reality. In the vast majority of people (including those who later identify as “transgender”), it is unambiguously identifiable at birth. There is no rational or compassionate reason to affirm a distorted psychological self-concept that one’s “gender identity” is different from one’s biological sex.

Neither lawmakers nor counselors, pastors, teachers, nor medical professionals should participate in or reinforce the transgender movement’s lies about sexuality–nor should they be required by the government to support such distortion.

In a piece published by the Federalist, Walt Heyer himself a former child transgender writes:

Studies are showing that kids are not born with this disorder. A 2014 study shows no specific chromosome aberration associated with MtF (male to female) transsexualism. A 2013 study looking for molecular mutations in the genes involved in sexual differentiation found none. Your child was not born in the wrong body.

I came into this world a boy. Starting in early childhood, I frequently cross-dressed as a girl. I thought I was born in the wrong body. A nationally-prominent PhD diagnosed me as a transgender with gender dysphoria. Eventually, I underwent the full recommended hormone therapy and the gender reassignment surgery and became the female Laura Jensen. I lived and worked successfully as a female transgender in San Francisco for several years until I was diagnosed with my own comorbid disorder.

With proper diagnosis and treatment with psychotherapy, I found the sanity and healing gender change could not provide. Trangenderism was my outward expression of an undiagnosed comorbid disorder, and gender-change surgery was never necessary. I detransitioned and returned to my male gender, like so many others do who regret changing genders.

The piece in the Federalist goes on to note that children who think that they were born in the wrong body are often experiencing stress from their (real or perceived) unsafe or unstable home or environment; separation from a parent by death or other events; serious illness among the family or child; domestic violence in the home; neglect, perceived or real; sexual, physical, or verbal abuse; or a strong opposition disorder from social norms.

National Geographic should not be celebrating or encouraging the confusion of a young child.