The Colorado District Attorney for the Second Judicial District recently wrote a scathing letter criticizing Colorado’s legalization of recreational marijuana and urging California voters NOT to enact a similar law with Proposition 64.

The letter dated October 12, 2016, and reiterates how since the legalization of marijuana in Colorado in 2013, crime rates have not gone down in the city of Denver, or in Colorado. “California voters are being told they will see the crime rate go down if they vote to legalize marijuana commercially,” the letter starts off, but “this has not been the case in the state of Colorado or the city of Denver.” The District Attorney goes on to detail some horrific statistics his letter:

Pueblo, Colorado had the highest homicide rate with 11.1 killings per 100,000 residents. Aurora, Colorado’s homicide rate more than doubled from 2014. Additionally, more places in Colorado were robbed and more thefts occurred, especially vehicle theft. A total of 193,115 vehicles were reported stolen, up 27.7% in 2015 from the previous year. In 2015, sexual assaults rose 10% in Colorado with Denver, Aurora, Lakewood, Westminster, and Pueblo all reporting higher numbers as well. The letter also notes:

In the city of Denver since the legalization of recreational marijuana the number of crimes in Denver has grown by about 44%, according to annual figures the city reported to the National Incident Based Reporting System. In 2015 in Denver alone crime rose in every neighborhood in the city. The murder rate hit a decade high, 1059 more cars were broken into, there were 903 more auto thefts, 321 more aggravated assaults and 2321 more homes were broken into compared to 2014.

These are all specific statistics from Colorado backing up what California Family Council has been saying on the harms of Proposition 64. California Family Council has written previously written articles detailing how Marijuana Negatively Affects Teens and Children, explaining that Marijuana Leads to Soaring Crime Rates and is Unsafe for California’s Roadways, and that overall, Proposition 64: An Unhealthy Choice for California.

The letter from the Denver District Attorney affirms these facts. Mr. Morrissey continues:

California voters are also being told that legalizing recreational marijuana will free up law enforcement to work on other criminal activities. Again that has not been the case in Denver. Besides the overall increases in crime we have experience[d], the Denver police department is dealing with a 900% increase in the unlawful cultivation and manufacture of marijuana concentrate, and a 99% increase in the unlawful distribution of marijuana and marijuana concentrate. The quantity of illegal marijuana seized by the Denver police has increased 3,424% on average per case. The volume of marijuana seized per case has increased from an average of 162 pounds to 5724 pounds. In Denver unlawful public consumption of marijuana citations has increased over 300% per year since the legalization of recreational marijuana. The Denver police department is busier enforcing marijuana laws and investigating crimes directly related to marijuana including murders, robberies, and home invasions than any other time in the history of the city.

Editor’s Note: The full text of the letter can also be read below. 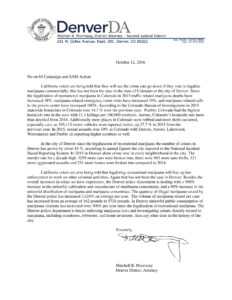 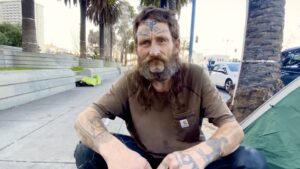