Governor Gavin Newsom signed a bill last night empowering state courts to remove out-of-state children from their parent’s custody if those children come to California because they can’t get sterilizing transgender drugs and mutilating surgeries in their home states or because their parents object to these experimental treatments for gender dysphoria.

Bill author Senator Scott Wiener (D-San Francisco) is characterizing SB 107 as a bill to make California a safe haven for parents who want to transition their children medically, but are forbidden to by their home states. Yet Newsom, Wiener, and the mainstream media are ignoring the section of the bill that enables children to be kidnapped and enticed to the state against their parents’ wishes and against the court custody determinations and laws of other states.

“SB 107 endangers every young person in the nation who experiences gender dysphoria,” said California Family Council President Jonathan Keller.  “By signing this extreme bill, Gavin Newsom is telling all parents across the country that he knows what’s best for their children. Mothers and fathers in every state should demand their elected representatives push back against this unconstitutional assault on parental rights. Governors and legislators must defend their citizens from this out-of-control government in Sacramento.”

The California Family Council joined parental rights groups from around the nation pleading with Governor Gavin Newsom to veto this bill, to no avail. More than 50 organizations signed a letter from the Promise to America’s Parents Coalition stating that SB 107 would strip parents in other states of their parental rights if their child travels to California to obtain life-altering drugs and irreversible surgeries.

So far, bill author Senator Scott Wiener has only promoted the part of SB 107 that lets parents and doctors escape prosecution in California for violating the laws of other states that have banned using trans-treatments on minors. When challenged about the new authority the bill gives state courts to remove children from their parent’s custody, Wiener dodges the question or denies custody will be affected by the bill at all. But the bill text is clear on this point:

(a) A court of this state has temporary emergency jurisdiction if the child is present in this state and the child has been abandoned or it is necessary in an emergency to protect the child because the child, or a sibling or parent of the child, is subjected to, or threatened with, mistreatment or abuse, or because the child has been unable to obtain gender-affirming health care or gender-affirming mental health care, as defined by Section 16010.2 of the Welfare and Institutions Code.”

The non-partisan Legislative Counsel’s Digest summarizes the paragraph above this way:

“The bill would authorize a court to take temporary jurisdiction because a child has been unable to obtain gender-affirming health care.”

The bill text also clearly legalizes kidnapping children from parents of other states if the children are brought to California for trans-treatments.

(d) In making a determination under this section, a court shall not consider as a factor weighing against the petitioner any taking of the child, or retention of the child after a visit or other temporary relinquishment of physical custody, from the person who has legal custody, if there is evidence that the taking or retention of the child was a result of domestic violence against the petitioner, as defined in Section 6211, or for the purposes of obtaining gender-affirming health care or gender-affirming mental health care… .”

The non-partisan Legislative Counsel’s Digest summarizes the paragraph above this way:

Watch the video below of Oklahoma Governor Kevin Stitt speaking out against SB 107.

We are grateful for governors who protect parental rights. @govstitt, thank you for speaking out against California's SB107. https://t.co/eobfKgDb4C pic.twitter.com/k6vRa6YQMl

Watch Testimony from Parents and Detransitioners Against SB 107 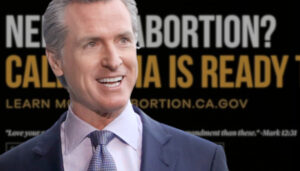