“This morning, Senator Schumer spoke at a rally in front of the Supreme Court while a case was being argued inside. Senator Schumer referred to two Members of the Court by name and said he wanted to tell them that ‘You have released the whirlwind, and you will pay the price,” Roberts said.

He continued, “You will not know what hit you if you go forward with these awful decisions.’ Justices know that criticism comes with the territory, but threatening statements of this sort from the highest levels of government are not only inappropriate, they are dangerous. All Members of the Court will continue to do their job, without fear or favor, from whatever quarter.”

Missouri Senator Josh Hawley introduced a resolution on Thursday cosponsored by 14 Republican Senators, in an effort to censure Schumer over his comments. Senator Hawley said:

“The Democratic leader should know better and … the bottom line is Schumer does know better,” he said. “He knew exactly what he was doing. This is a piece of political theater, political vaudeville, really it was pathetic. And he should be censured for it. I mean, this should not be allowed.”

“At best, it was an injection of partisan politics into a process that should be immune to them. At worst, it was a threat targeting two sitting members of the Supreme Court,” Senator Grassley said on the floor of the Senate.

Senate Majority Whip John Thune said, “At these political rallies there’s a lot of energy going and sometimes people say things in a way that they probably wish they wouldn’t have later,” he said. “It seems to me he sort of acknowledged that and I hope that he’ll be more thoughtful going forward.“

Republican Senator Lindsay Graham, a strong Trump supporter, stated that he did not think censuring Schumer was a good idea. “If we start censuring him, they’re going to want to censure Trump, and this stuff never ends.”

Schumer still has not apologized, although he did admit he shouldn’t have used some of the words he said on Wednesday. 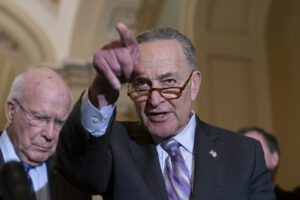