Baby Safe Haven Laws exist to give women a life-saving option if they feel unequipped to raise their children on their own. These laws designate locations across the United States such as hospitals, fire and police stations where mothers can bring their babies and drop them off in the hands of a professional – no questions asked.

Baby Safe Haven explains why the program was created:

In 1999 an overwhelming number of infant abandonments took place. Never before in a single year had so many mothers decided that they couldn’t care for their children—and then disposed of their newborn infants in an unsafe and tragic way.

In response, a group of dedicated people worked together to create a law that would guarantee no mother ever had to secretly dispose of her newborn infant. This law would protect the mother and assure her that she would not be prosecuted for relinquishing her baby. So long as the baby was safe and given to a responsible adult at a designated location, the mother would be free to go anonymously.

Since its inception, over 2,000 babies are known to have been positively impacted by the Baby Safe Haven program.

Monica Kelsey is the founder and CEO of Safe Haven Baby Boxes. Kelsey was herself adopted, and learned years later that she was also abandoned as a newborn. While at a church in Cape Town, South Africa, Kelsey first received inspiration for Safe Haven Baby Boxes, upon observing a baby box where parents could discreetly drop off their newborn babies without facing judge mental interactions from others. After seeing this idea in action in South Africa, Kelsey decided to start Safe Haven Baby Boxes, to enable mothers to give away the care of their child to someone else without facing legal repercussions and enduring the stigmas associated with publicly giving up one’s child.

According to Baby Safe Haven:

Safe Haven Infant Protection Laws enable a person to give up an unwanted infant anonymously. As long as the baby has not been abused, the person may do so without fear of arrest or prosecution.

The purpose of Safe Haven is to protect unwanted babies from being hurt or killed because they were abandoned.

You may have heard tragic stories of babies left in dumpsters or public toilets. The parents who committed these acts may have been under severe emotional distress. The mothers may have hidden their pregnancies, fearful of what would happen if their families found out. Because they were afraid and had nowhere to turn for help, they abandoned their babies.

Abandoning a baby puts the child in extreme danger. Too often, it results in the child’s death. It is also illegal, with severe consequences. But with Safe Haven, this tragedy doesn’t ever have to happen again.

With Safe Haven, no one ever has to abandon a child again.

It’s an option you and your baby can live with.

While it is unfortunate that some women are faced with the decision of whether or not to themselves raise their child or utilizing a Safe Haven baby box, the reality is that women should feel no shame or stigma in choosing the life-saving, or life-enhancing option for their child. 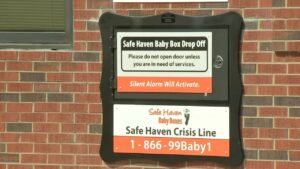 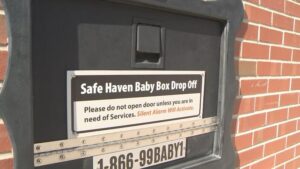