The same night that a destructive mob gathered outside of Tucker Carlson’s residence to try to intimidate his family, Carlson delivered an impassioned speech about the importance of restoring a focus on strong family values. According to Carlson, a lack of emphasis on protecting and encouraging strong families played a big part in Republicans losing the majority in the House in the recent midterm elections.

Unbeknownst to Carlson, the same time that he was preparing to deliver his monologue, a group of Antifa mobsters were gathered outside his Washington, D.C. home where his wife was inside. The protesters were part of the group called Smash Racism DC, and were there (in there own words) to “remind you that you are not safe.” They told the conservative TV pundit that he should get out of town, and threatened him by saying “we know where you sleep at night.”

Carlson’s wife, Susie was inside their Washington, D.C. house at the time but did not call her husband because she knew he would be prepping for his show.

Only minutes late, Carlson delivered a passionate speech suggesting that one big reason the House of Representatives lost their majority in the November 6, 2018 elections is because they didn’t place a big enough importance on family.

“There’s nothing wrong with tax cuts, but Republican strategists seem to forget that a huge percentage of Americans don’t pay federal taxes,” Tucker said. Instead, “their concerns are tangible concerns. What does gas cost? Can I afford to live in a safe neighborhood? Will I go bankrupt if I get sick?”

Carlson stated his opinion that whichever party most effectively argues for family values and addresses the above questions usually wins elections.

“Young people can’t afford to get married or have children. Take a look at the numbers sometime,” Carlson said, which “foretell an ominous future for all of us.”

“A country without strong families is a weak country. It is a volatile place, a chaotic place. It’s a place susceptible to political demagoguery. It’s what America is becoming,” Carlson warned, “If you want to stop that slide, support families. It’s that simple.”

“If your supposedly conservative economic program doesn’t make it easier for young people to get and stay married and have kids, how is it really conservative?” Carlson asked. “If couples are too poor to have children and you’re not helping, why should I as a conservative vote for you?”

“I should not vote for you; I will not vote for you. I will work against you; that is my pledge,” Carlson declared in conclusion. “Supporting marriage and children is the best, maybe the only way for Republicans or any of us to save the country.”

D.C. police say that a criminal investigation is underway with regards to the death threats made to Carlson and his family, but as of yet no arrests have been made. This is also the same group that went after Ted Cruz and his wife while they were quietly enjoying dinner together at a restaurant. 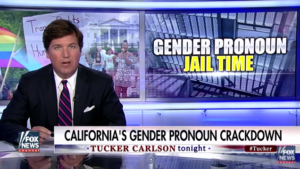