NPR public radio totally shut down an attempt by the producers of the Gosnell movie to run a movie promotion and purchase airtime for an ad using the words “abortionist” and “abortion doctor.”

“Support for this NPR program comes from the film Gosnell: The Trial of America’s Biggest Serial Killer. The film is the true story of abortionist Kermit Gosnell. A story the mainstream media tried to cover up because it reveals the truth about abortion.”

The NPR editors sent back the wording with several changes, including the stipulation that the word “abortionist” be changed to “doctor.” Sullivan countered with the request to use “abortion doctor” since the term was both accurate and neutral. NPR said no. The producers had to use “Philadelphia doctor Kermit Gosnell” or the ad would not be run.

“Our movie isn’t about a podiatrist or a cardiologist or a proctologist,” producer Phelim McAleer told Lifenews. “It’s specifically about a doctor who performs abortions.”

Gosnell was found guilty of 21 out of 24 felony counts of illegal abortions beyond the 24 week limit and found guilty on all but 16 of 227 misdemeanor counts of violating the 24-hour informed consent law.”

Ironically, NPR says it strives to remain neutral in its reporting. “Busting filter bubbles is a key part of our public service mission,” said NPR’s Senior Vice President of News Michael Oreskes. “NPR One prides itself on editorial responsibility.”

It is unclear why NPR deemed the term “abortion doctor” unacceptable. In the past, NPR did a special series called “Training the next generation of abortion doctors,” and an NPR news story about Gosnell had the headline, “Convicted Philadelphia Abortion Doctor Gets Life in Prison.”

NPR’s action are just the latest in a long string of attempts to silence the message of the Gosnell movie, and the events surrounding Gosnell’s trial.

The producers behind Gosnell have had an uphill battle pretty much since the beginning of the project. They started a fundraiser on Kickstarter, only to to have the fundraiser censor their fundraiser due to its pro-life nature. Lifenews reports that, “McAleer and McElhinney then pulled out of Kickstarter and proceeded to fundraise via Indiegogo, a similar fundraising website. Their campaign went well, to say the least. Nearly 30,000 people raised $2.3 million in 45 days for “Gosnell,” which broke the website’s fundraising record. Even though McAleer and his wife made Indiegogo history, there was little fanfare.”

The movie doesn’t just focus on Gosnell’s atrocities, but also points out that the media ignored the grisly details of what was a very public trial at the time.

It seems not much has changed. 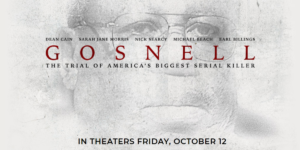