It appears likely that the Senate will confirm President Donald Trump’s pro life, pro family nominee for Secretary of State, Mike Pompeo. On Monday, the Senate Foreign Relations Committee announced that he was being recommended for the position following a narrow vote. Pompeo is a former Congressman from the state of Kansas currently serving as the CIA Director.

During his time in Congress, Pompeo was an outspoken advocate of life, family, and natural marriage. California Family Council previously wrote that, “During his time in Congress, Pompeo stated clearly that he believes life begins at conception and should only conclude at the time of one’s natural death. Pompeo co-sponsored a bill that would have granted 14th amendment protections to unborn children. He also co-sponsored the Title X Abortion Provider Prohibition Act that provided for the prohibition of federal funding to any group that performs abortions.”

Pompeo’s conservative positions – especially his pro-life stances – has caused Democrats to target Pompeo and attempt to undermine his credibility to serve as Secretary of State. Pompeo’s likelihood to be confirmed by the Senate was questionable until two Democrats, Sen. Joe Manchin of West Virginia and Sen. Joe Donnelly of Indiana, announced they would vote for his nomination. Republican Senator Ran Paul from Kentucky also announced he would support Pompeo, unexpectedly changing his decision after repeated talks with Trump.

Senate Majority Leader Mitch McConnell stated his opinion that Pompeo will be confirmed, according to the Courier Journal.

“The Pompeo nomination has now been reported out of the Foreign Relations Committee, and there are sufficient votes in the Senate to ensure that he will be confirmed this week as our nation’s next Secretary of State,” McConnell’s office said in a statement.

“It is hard to imagine someone more thoroughly qualified than Mike Pompeo, McConnell stated during his remarks on the Senate floor. “His career is a success story on every level. He graduated first in his class from West Point, served as a U.S Army Officer, and attended Harvard Law School.”

“In Mike Pompeo, the United States will have a chief diplomat who enjoys the total confidence of the president, and who’s uniquely qualified to reinvigorate our Foreign Service and represent our interests abroad. It is hard to imagine a better nominee for this mission, at this moment, than Mike Pompeo. I look forward to upholding the tradition of this body and voting to confirm him this week.” 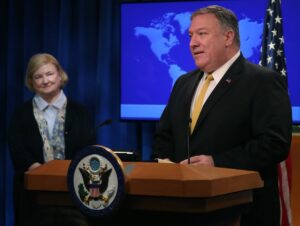 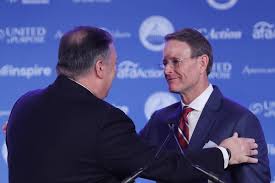 Secretary of State Pompeo: Preservation of Human Dignity & Religious Liberty is the Heart of Our Mission

Secretary of State Pompeo: Preservation of Human Dignity & Religious Liberty is the Heart of Our Mission