In a stunning late-night victory for California homeschoolers and parental rights, AB 2756 was defeated in the Assembly Education Committee late Wednesday, April 25. The decision only came after committee members listened to hundreds of homeschoolers, one by one, give three hours of testimony against the bill. In the end, not one member of the assembly committee voted for the bill. (Watch the hearing here.)

“What we saw tonight was a massive victory for homeschool families, parental rights, and government by consent of the people,” said Jonathan Keller, president of California Family Council. “Thanks to the thousands of homeschool families and supporters who flooded the Capitol, legislators were reminded that this building is still the people’s house.”

Authored by Democrat Assemblymember Jose Medina from the Riverside area, AB 2756 originally demanded all homeschool families in California submit to involuntary home inspections. According to the author, the bill was motivated by an horrific child abuse case in his district involving a homeschool family. “I am extremely concerned about the lack of oversight the State of California currently has in monitoring private and home schools,” said Assemblyman Jose Medina was quoted as saying, despite the fact there are no statistics indicating child abuse rates being higher in homeschooling families.

Yet, after a massive outcry from the homeschooling community, Assemblymember Medina removed the inspection requirement, changing it to merely a bill that would identify the name and address of every homeschooling family in California.

But with no justifiable reason the state needed this information, California’s homeschooling families still viewed AB 2756 with suspicion and as a prelude to the government meddling with their right to educate their children in a manner they determined.

Last Wednesday, hundreds and hundreds of people poured into the capitol hoping to get a seat in the Assembly Education Committee hearing room. Before the hearing even began, homeschool families, with their strollers, signs, and children of all ages lined every hallway of the capitol forth floor, hoping for a chance to voice their opposition to the bill.

At the same time parents and children from every corner of the state gathered in long lines that streamed outside the capitol building entrance as security checked through their belonging. There were so many people on the fourth floor that the air-conditioning system couldn’t handle the stress. As temperature rose, sweat started pouring off foreheads, while others used their signs to fan themselves. But the crowds waited patiently for three hours as each member of the crowd, one by one, went to the microphone to tell committee members to vote no.

Once the testimony was over the Committee Chair, Assemblyman Patrick O’Donnell, remarked “this is the longest hearing I’ve ever been a part of.”

Under intense questioning from Republican Assemblyman Kevin Kiley during the Education Committee hearing, Mr. Medina admitted that the bill “didn’t actually do very much,” and he struggle justifying why any member should vote for it. 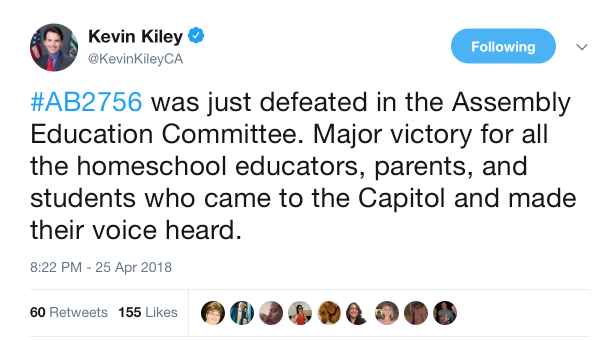 When it came time to vote, there weren’t enough members of the committee left to cast a vote, so it had to be delayed until later that night. When the voting time came, the chair asked for someone to make a motion to approve AB 2756. The only answer: silence. With no one willing to make a motion, the proposal died.

Tonight’s victory was especially encouraging given the multiple assaults on Life, Family, and Liberty currently making their way through the legislature. AB 2943  would ban certain religious books, conferences, and counseling, and AB 2119 would force foster parents to become complicit in the transgender revolution. But the groundswell of opposition shows that California’s conservatives will not go quietly.

“What we saw today shows that when people of faith stand up and make their voices heard and refused to back down, even Sacramento has to listen,” said Keller. “Now is the time for all people of faith to continue to press forward to defeat other bills like AB 2943.”