On Sunday March 11, 2018, calloused abortionist Leah Torres tweeted a reply tweet to someone criticizing her work. In her tweet, Torres openly revealed the gruesome nature of what she does during an abortion procedure.

When someone asked if she hears the screams of babies she aborts, Torres replied:

You know fetuses can’t scream, right? I transect the cord 1st so there’s really no opportunity, if they’re even far enough along to have a larynx.

I won’t apologize for performing medicine. I’m also a “uterus ripper outer,” if that’s how you’d like to describe hysterectomy. https://t.co/lng0W3ta5J 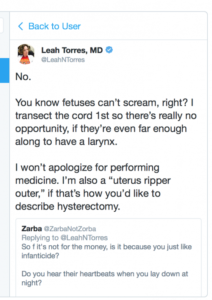 While Torres doesn’t make it clear whether she is talking about cutting an umbilical cord or a baby’s vocal cords, her statement is shockingly gruesome either way. But it’s honest. And of course, it attracted a lot of attention. According to Lifesite News, “Abortion by umbilical cord transection is a method of abortion. During such an abortion, “using the ultrasound for guidance, the physician then punctures the amniotic membrane, inserts an instrument into the uterus, grasps the cord, and with another instrument cuts the cord. The physician must then wait for the fetal heart activity to cease, which usually occurs after 10 minutes.”

According to Lifenews, “Interestingly, Cecile Richards, the president of Planned Parenthood, the largest abortion chain in America, liked several of Torres’s posts defending her initial tweet.”

David Daleiden of the Center for Medical Progress stated that the only reason CMP did not conduct undercover investigations of the Utah Planned Parenthoods was due to Torres’ reputation as a calloused abortionist.

CMP didn't end up doing an undercover site visit of @ppacutah in part because their abortion doctors were the only ones who actually scared me. Thanks @LeahNTorres for the very honest reminder. #PPSellsBabyParts #ShutThemDown https://t.co/fxy4u9d6ww

Every now and then, someone on the left slips up and reveals the brutal reality of abortion. Don't ever let them forget it. pic.twitter.com/bsJEKISQEL

Lauren Enriquez of Human Coalition aptly compared abortionists like Leah Torres with the Nazi experiments conducted during the era of the Third Reich under Adolf Hitler.

Torres later deleted the tweet, saying she did so because her friend asked her too, simultaneously saying she “is not sorry” for the tweet.

And I appreciate that. I'm not sorry for the post, but I am sorry other people cannot open their eyes and see past blind hatred and ignorance in order to view a greater good.

The National Right to Life Committee describes what happens during a dismemberment abortion like abortionist Leah Torres brags about performing. “Dismemberment abortion is a brutal type of abortion with the purpose of causing the death of an unborn child, purposely to dismember a living unborn child and extract him or her one piece at a time from the uterus through use of clamps, grasping forceps, tongs, scissors or similar instruments that, through the convergence of two rigid levers, slice, crush, and /or grasp a portion of the unborn child’s body to cut or rip it off.”