The Legacy of “America’s Pastor” to be Honored at U.S. Capitol Tomorrow

Tomorrow, February 28, 2018, the late Reverent Billy Graham also affectionately known as “America’s Pastor” will lie in honor in the United States Capitol Rotunda. Government workers, Congressmen, and the general public will be able to view and pay their respects as he lays in honor. The Rotunda of the United States Capitol has traditionally been considered the most appropriate location for honoring the most eminent of our nation’s citizens.

The Reverend Billy Graham passed away last week at the age of 99 and served as the advisor to twelve consecutive United States Presidents. He preached in person to over 200 million people and traveled to 185 countries sharing the good news of the gospel.

Lying in state or lying in honor at the U.S. Capitol is a way for Congress, and the country, to pay tribute to distinguished Americans who have passed. While lying in state is traditionally reserved for military officers or elected public officials, private citizens may lie in honor. In total, 26 individuals have lain in state, in addition to three instances where Congress honored the unknown soldiers of World War I, World War II and the Korean War, and of the Vietnam Era. Previously, only three individuals in our country’s history have lain in honor: U.S. Capitol Police officers Jacob Joseph Chestnut and John Michael Gibson, who were killed in the line of duty in 1998, and civil rights pioneer Rosa Parks in 2005. Senator Daniel Inouye of Hawaii was the last person lain in state following his passing in 2012.

Ceremonial stanchions are cleaned and polished, the floors of the Rotunda are buffed and waxed, stone entrances to the U.S. Capitol Building are power washed, and lamps and other lighting is checked.

The evening before the ceremony, which is hosted by congressional leadership, the AOC installs ceremonial stanchions, chairs, podium and media risers. A viewing queue is established and staffed within the Capitol Visitor Center and tables with condolence books put in place. Electrical and sound requirements are met and tested – including microphones on the podium and event lighting.

Once the casket arrives at the U.S. Capitol, the AOC works with care behind the scenes to ensure the ceremony is successful and seamless to the attendees and the viewing public.

Tomorrow the President and members of Congress will honor him with remarks. The President will also participate in a wreath-laying ceremony. The ceremony will begin at 11 a.m., after which the Rotunda will open to the public at 1 p.m. The Capitol service and public viewing will be streamed on speaker.gov/live. 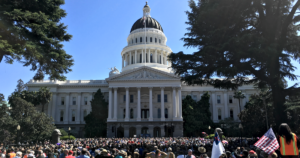