The California Family Council was contacted recently by a military mom named Amy Haywood living in the San Diego area who was alarmed about the age-inappropriate LGBT content her child had assess to in her public school. Amy launched herself into an in-depth research project using skills she gained while working as a legislative aid on Capitol Hill for former Pennsylvania Congressman and outspoken Christian Joe Pitts.  She discovered the LGBT content coming to every California public school was about to increase dramatically because of the implementation of the Fair Education Act, SB 48. What she found was so well put together, we wanted to share it with you. Read her article below.

Something odd is happening in California. Historic and unprecedented changes that will affect millions of children are about to hit our schools; even though it is one of the most controversial topics in the history of mankind, I hear NO ONE talking about it. In November, the California State Board of Education is set to adopt new textbooks for history and social sciences that will carry out the mandates of California Senate Bill 48 (SB48), the FAIR Education Act, which provides for the inclusion of the Lesbian, Gay, Bisexual and Transgender (LGBT) perspective in K-12 textbooks.

I first learned about the issue because my 8-year-old had access to a program through her public school called BrainPop (this was material that had to go through the district, so I do not believe teachers even realize that this information is available. Note: We have only had excellent teachers at Willow Grove, and I do not fault them for any of this material that is provided by a PUSD-approved vendor). While perusing the site I came across information under the heading “Sex Determination.” It described chromosomal abnormalities that caused babies with male chromosomes to be born with female reproductive organs. It urged children with questions to contact the Intersex Society of North America. Under the “Sports” heading for this topic of sex determination, children could learn about athlete Caster Semenya. Many questioned whether or not she was a female. A professor of bioethics was quoted as saying, “‘There isn’t really one simple way to sort out males and females…Genes, hormones, and genitals are pretty complicated…Biology does not fit neatly into simple categories.’”

I wondered how it was legal for this age-inappropriate information to be allowed into an elementary school without parental permission.  As I dug for information, I learned that not only was it legal because of SB 48, it was about to be pushed even more aggressively once new textbooks were adopted in 2017. The Act mandates the inclusion of the LGBT perspective in school curricula (K-12), and it prohibits instruction that would adversely reflect on religion and the LGBT community.

I viewed the testimony from the bill’s March 23, 2011 hearing in the CA Senate Education Committee. One of the bill’s opponents, a retired psychologist, Dr. Robert Evans, raised some valid questions about the proposed language when he asked,“First, I am wondering if… in adding sexual orientation and religion to the list of characteristics for which instructional material shall not reflect adversely…, how would one responsibly teach concerning a religion that holds a less than favorable view of homosexuality without such instruction, per se, reflecting adversely on that religion?”

Senator Alan Lowenthal dismissed his concern saying, “We take five years before we get things into the textbooks, and so I’m sure that will be dealt with if this bill moves forward.”

This issue was never addressed.

Evans also pointed out that the language confuses characteristics that are chosen versus characteristics that are ingrained in one’s DNA. He said that in “adding the role and contributions of lesbian, gay, bisexual, transgender Americans and European Americans to the list of groups of people…that are required to be included, that… it confuses two different classifications of traits not two different classifications of persons…one that is innate and one that is a list of characteristics and/or choices that have not to date been conclusively demonstrated to be innate.”

This is a valid concern that was not addressed.

Dr. Miriam Grossman, a medical doctor with training in pediatrics and psychiatry, shared with the committee from her expertise in child development. She claimed that SB 48 was “based on seriously flawed thinking…” and she had “…deep concerns about the consequences to the children…” of California if it became law.  The authors of the bill “ignored fundamental principles of child development.” Grossman stressed that there are differences in the way children and adults “process and integrate information and experiences,” and some facts “a child cannot easily assimilate because he simply lacks the tools to do so; he is immature and can be overwhelmed and confused more easily than adults.”

Grossman explained that small children do not have the ability to understand “the idea of transgenderism—that a person can feel trapped in the wrong body…that the person feels that nature made a mistake and that this idea of going to a doctor and asking the doctor to remove a normal body part; this is confusing and frightening to children….” Acknowledging that such ideas are hard for adults even to understand, Grossman concluded there is no way to explain such a concept in an age-appropriate way. She claimed that the bill ignores standard child psychiatry material in regard to gender permanence, which is a developmental milestone that is reached by 6 or 7 years of age.

Grossman emphasized that children are not “miniature adults,” and “it is our responsibility to protect children as best we can from exposure to facts and experiences that they are not equipped to handle.” She also stated her belief that it’s possible to “teach children the importance of respect and tolerance in a manner that is consistent with child development and biological truths.”

Despite these serious concerns, and those raised by many other witnesses, the FAIR Education Act passed in 2011 and took effect in January of 2012—but the questions Evans and Grossman raised remain unanswered.

Today we are seeing the effects of this poorly written law coming to fruition. The textbooks up for consideration will incorporate the mandates of this law. The proposed textbooks are searchable online at the California Department of Education (CDE) website, so I searched several of the textbooks and found quite a bit of one-sided material aimed at normalizing these issues that are still dividing our country. 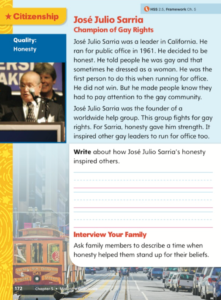 Just to show a couple of examples, in Pearson’s myWorld Interactive 2, Chapter 5 teaches second graders about Jose Julio Sarria, a Californian who ran for public office in the sixties. The text reads:

“He decided to be honest. He told people he was gay and that sometimes he dressed as a woman. He was the first person to do this when running for office. He did not win. But he made people know they had to pay attention to the gay community.”

Children are then prompted to write about how Sarria’s honesty was inspirational to others. 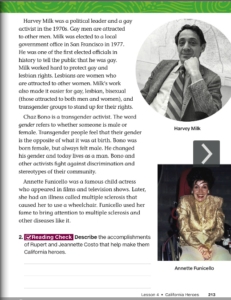 Additionally, Pearson’s myWorld Interactive 3, on a lesson about “California Heroes,” introduces transgender activist Chaz Bono, and informs third graders that “gender refers to whether someone is male or female. Transgender people feel that their gender is the opposite of what it was at birth. Bono was born female, but always felt male. He changed his gender and today lives as a man. Bono and other activists fight against discrimination and other stereotypes of their community.”

I reviewed all of the texts for elementary school, and I was alarmed at the content, so I submitted a comment in anticipation of the public comment meeting to be held in August. I informed some of my friends about this issue, but it was complete news to them.

In early September, I asked an Education Programs Consultant in the Curriculum Frameworks Unit at CDE to send me a link to all of the written public comments and a link to the audio files of the meeting, which he did. In a very cursory search through pages of public comments, and on the topic of inclusion of LGBT material, I could only find one statement in outright opposition—and that was my own. Many were opposed to some of the textbooks, but only because they deemed them not aggressive enough in carrying out the purposes of the FAIR Education Act. Is it possible that there might only be one person or a handful of people in all of California who are opposed to these changes? This is highly doubtful.

What parents need also need to know about this issue is that there may be a way out. In regard to the implementation of SB48, CDE guidance states that “it falls to the teacher and the local school and district administration to determine how the content is covered and at which grade level(s).” Furthermore, Education Code Section 60002 stipulates, “Each district board shall provide for substantial teacher involvement in the selection of instructional materials and shall promote the involvement of parents and other members of the community in the selection of instructional materials.” Parents need to get involved and speak up in their local school districts.

Also, if parents are not taken seriously, I believe this issue will make its way to the Supreme Court; SB 48 and the resulting textbook changes suppress Constitutional rights by elevating LGBT beliefs over other beliefs.

So, why the eery silence and seeming apathy on an issue of such importance to the well being of our children? I suspect that Chief Justice Roberts’ dissent in the Obergefell v. Hodges ruling that made same-sex marriage legal across the United States foreshadowed this situation exactly when he wrote:

“By the majority’s account, Americans who did nothing more than follow the understanding of marriage that has existed for our entire history—in particular, the tens of millions of people who voted to affirm their States’ enduring definition of marriage—have acted to ‘lock…out,’ ‘disparage,’ ‘disrespect and subordinate,’ and inflict ‘[d]ignitary wounds’ upon their gay and lesbian neighbors.”

Chief Justice Roberts predicted that these “assaults on the character of fair-minded people will have an effect, in society and in court…It is one thing for the majority to conclude that the Constitution protects a right to same-sex marriage; it is something else to portray everyone who does not share the majority’s ‘better informed understanding’ as bigoted.”

As Chief Justice Roberts foretold, people who don’t share the beliefs of the LGBT community are often labeled as bigots. As such, people are afraid to speak up—even though the First Amendment fully supports their right to do so. I suspect many people believe like I do—I support your right to live your life according to what you fervently believe in your heart and mind to be true; but the Constitution prohibits you from using the government to force your sexual orientation and gender identity ideologies on my child causing her to go against the dictates of her conscience. If parents and concerned citizens don’t speak up, I fear for the First Amendment rights of the families and children of California—and, in the long run, the United States.