Through Unspeakable Tragedy, the Response to Hurricane Harvey Showcases Humanity.

Tragedy often brings people together and that is certainly the case with Hurricane Harvey, which has now weakened to a tropical storm. The storm is still pounding Texas and Louisiana and made a second landfall early Wednesday morning in western Louisiana, with rain pummeling much of the Gulf Coast. The danger from flooding is still life threatening in Texas.

The death toll from #hurricaneHarvey is now confirmed to be at least 30 people, likely more. Over the next few hours and days that number will rise. Now, more than ever, the people of #Houston need your prayers.

Reservoirs are above capacity in Houston. According to the New York Times live updates:

Over the past few days, more than a trillion gallons of rain have fallen in Harris County alone – reportedly enough to “run Niagara Falls for 15 days,” or fill the Houston Astrodome 3,200 times. The rainfall is so heavy that parts of the Houston area set a record for rainfall from a single storm anywhere in the continental United States, with a top reading on Tuesday afternoon, since the storm began of 51.88 inches.This eclipses the previous mark of 48 inches that was measured in Medina, TX during Amelia, a tropical storm in 1978. The numbers may surpass the overall United States record for total rainfall from a single cyclone. In Hawaii, during Hurricane Hiki in 1950, 52.00 inches of rain were recorded at a ranger station on Kauai.

Hurricane Harvey is also expected to leave about $40 billion dollars in lost revenue or property damages. The last hurricane that hit the coast of Texas, Hurricane Ike, was only a category 2 storm and it cost $30 billion in damages and the loss of 37 lives. The death toll for Hurricane Harvey is expected to be much higher after the waters eventually recede and the (now tropical storm) abates

Despite the ongoing tragedy, heroes and good Samaritans have risen to the occasion. The support for Houston has surpassed all political stripes, religions, and ethnic backgrounds.

According to Rolling Stone,  National Voluntary Organizations Active in Disaster President and CEO Gregory A. Forrester articulated that focusing on relief efforts can bring everyone together, which is exactly what needs to happen.

“I would encourage [any volunteers] even if they’re not faith-related, we’re all in this together at this point,” he says. “And don’t anticipate that anybody is going to try and push faith on you anyways, even if you do go and volunteer at the local church to assist with putting together the care kits that are going to be needed … It’s about helping.”

There are thousands of volunteers from multiple charity organizations such as the Red Cross, Samaritan’s Purse, etc. engaging in relief efforts.

According to ABC News:

FEMA Administrator Brock Long said at a press conference Wednesday that there are more than 12,000 emergency staffers on the ground in Texas and Louisiana, spread across 50 counties. The agency is operating more than 230 shelters in Texas, housing more than 30,000 people.

The Louisiana Cajun Navy, first formed in 2005 in the wake of Hurricane Katrina, composed entirely of thousands of volunteers, reassembled and headed into Houston in pickup trucks and small motorized fishing boats on Sunday and worked at pulling people from their homes, parking garages, or even flooded shelters.

"#Houston Hang on. The CAJUN NAVY is already activated and on the way."https://t.co/J62KpUODPg pic.twitter.com/q4n7HuO9Pq

“It’s a mix of emotions,” a member of the Cajun Navy named Jeff told KTRK. “You hate to see people lose all they have. All we can do is get them to dry land.”

Another heartwarming incident occurred as a Weather Channel reporter interupted a live broadcast from the site of a totally demolished school and rescued a tattered American flag. Rare reports that “Paul Goodloe is on the ground in Texas to cover the impact of Hurricane Harvey on communities across the state.” In the video, Goodloe notices the flag, “I’m gonna have to pick that up,” he began. “I can’t let Old Glory just sit there like that. The school, yeah, it’s battered — so is the flag. We’ve got to fold this up, make sure it isn’t a casualty to Hurricane Harvey.”

Goodloe then proceeded to fold the flag in the proper manner, in 13 folds. This is especially touching, given the significance of each fold in a symbolic flag folding ceremony. Fold 1 represents life, fold 4 is symbolic of our weaker human nature, and our reliance on God in times of distress, and the 13th and final fold leaves the flag with the stars facing upward reminding us that we put our trust in God.

ABC News reports several other incidents where lives were saved though heroism:

A local Houston doctor, Dr. Stephen Kimmel, braved the Hurricane Harvey floodwaters in a canoe to make it to the hospital so he could perform surgery on a teen who needed immediate surgery.

Neighbors banded together, literally, to help a woman in labor receive assistance from Houston Fire Department emergency workers. Residents in a Houston complex made a human chain to help the woman and her husband get into a rescue truck.

Houston Texans star JJ Watt has put together a massive fundraiser to help the victims of Hurricane Harvey. In a video posted to Instagram 5 hours ago, Watt announced that the fundraiser has raised $5.1 million, but at the time of writing this article, the $6 million goal has almost been reached. It is likely that Watts will increase the new goal, as donations keep pouring in (so far from roughly 61,000 donors).

Some of the heroes unsurprisingly are even teens.

15 yr old Declan and friends have been picking people up in Meyerland since late morning @HoustonChron #houstonflood pic.twitter.com/fOh8lwXBzm

Others with giant trucks helped in the rescue efforts.

They say they called 911 and the coast guard – no answer. But @8thWonderBrew stepped up. #abc13 #Meyerland pic.twitter.com/3pv20byqRH

These two deputies helped rescue a disabled woman and carry her and her wheelchair to safety.

I ❤️ #Houston. This diverse city coming together to take care of each other. Thank you to Deputies Fernandez, Patel & Tran! #Harvey pic.twitter.com/2vXxWQaOq2

The response from relief efforts, organizers, and search and rescue personnel beautifully illustrate the sentiment expressed by Jesus in John 15:13, “Greater love has no one than this, that someone lay down his life for his friends.” In the middle of unspeakable tragedy, the response to Hurricane Harvey showcases humanity.

[Editor’s Note]: Samaritan’s Purse is on the ground and fully prepared to come alongside hurting families in Jesus’ name. See how you can help. Visit SamaritansPurse.org. 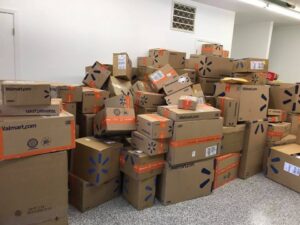 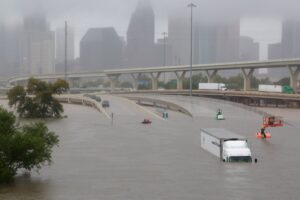