Family Research Council’s Director of the Center for Human Dignity, Arina Grossu, notes that this recent scientific and technological discovery “should inform our fetal pain debate.”

The study generated 3D images at the cellular level of actual human embryos ranging from 6 to 14 weeks gestation (4 to 12 weeks post-fertilization), as never before seen. These images show nerve, muscular, cardiovascular, and other organ system development. The results are incredible. For example, below is an image of the complex peripheral nerves of an embryo at 7 to 8 weeks gestation (5-6 weeks post-fertilization):

The second image shows the nerves on the right hand of embryos from 7-11 weeks gestation (5-9 weeks post-fertilization). Even at 7 weeks gestation, the development is quite advanced—even more so at 11 weeks. All of this is happening in the first trimester! 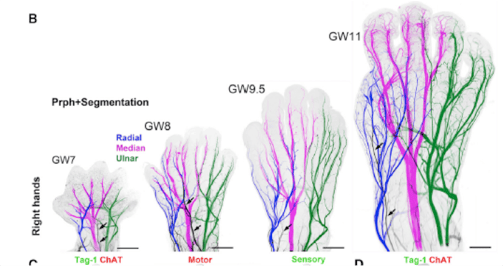 Sheila Page, D.O., is board certified in Neuromusculoskeletal Medicine and Osteopathic Manipulative Therapy confirms that a preborn child responds to sensory input as early as 7 weeks. Page says that by 10 weeks a preborn infant has many of the same much of the same identifiable anatomical features as an adult.

In an interview with LifeNews, Page notes:

I can’t begin to understand a motivating force behind insisting that pre-born children feel no pain. The arguments are often centered on a false supposition that there is a pain perception center in the cortex that is not functioning or intact until as late as 26 weeks. There is simply no evidence that this is true. Almost all of the pain fibers terminate in the reticular activating system, and a small percent connect in the thalamus to neurons that travel to the sensory motor cortex for the purpose of localizing the pain. This means that the message is delivered to its intended destination, the lower brain centers, which are responsible for the perception of pain and for alerting the whole nervous response system that damage has been inflicted.

Only seven countries allow wholesale abortions after the 20 week period, among them China and North Korea. The United States should not be among that number. Twenty states have passed laws restricting abortions after 18-20 weeks.

In light of this new research, abortion five months into a pregnancy certainly does not make the United States a better country. We need to stand up for the rights of the least among us, those helpless to defend themselves. Science, research, and technology are on our side. We need to stand with science and be on the right side of history.